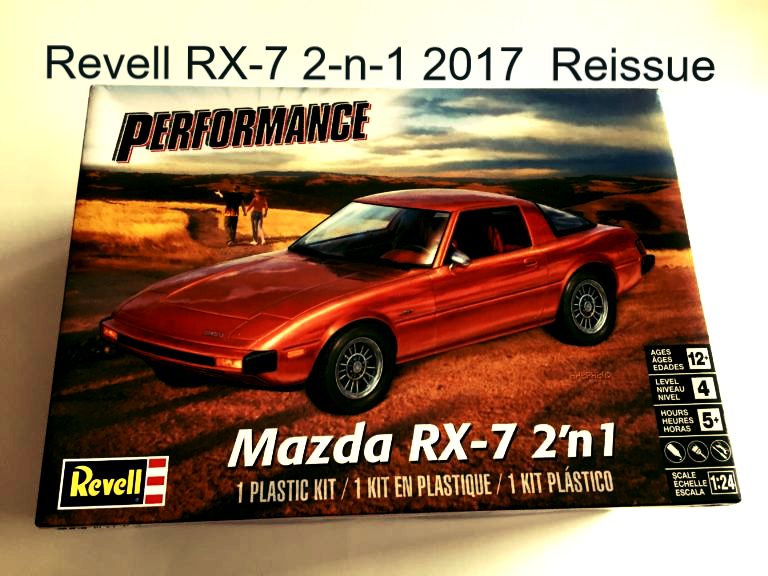 Revell Monogram 85-4429
To my knowledge, this is the only 1st generation RX-7 available with a complete engine and transmission. Originally released by Monogram in 1979 in “stock” form, the kit was also released in 1981 as a “Cafe Racer”, complete with racing seats, roll bar, and fender flares. The street version was re-released in 1996 or so as part of the Monogram “Selected Subjects Program”. Unlike most other kits of the 1st generation RX-7, this kit also features right hand drive (RHD) left hand drive (LHD).  For those of us in the States, that's a nice feature!   The original street version was molded in red, and the race version was molded in something akin to blue. The box states the kit to be 1/24, but comparing it to the Tamiya kit of the 1st generation car, I’d suspect it’s a tad closer to 1/25. On the other hand, the tires and wheels in the Tamiya kit appear to be much larger than the 13” versions on the real car, so who knows?

Recently (2017), Revell re-released this kit as a 2-n-1, featuring all of the parts from both previous releases.  There is some flash, especially on the “racer” wheels, but this can be expected with some of these older releases.  I’ll remove the chrome and repaint the wheels, anyway.

The box features build-ups of both the street and racer version, and you can see that the decals are translucent just from the build-up of the racer - at least for the "7" roundel. But, I think one can address this with either a painted white circle under the car numerals, by doubling up decals from a second kit (cost not withstanding), or by using aftermarket racing numerals/circles that are available online. Aside from the obvious decal concern, the actual kit plastic looks pretty good overall. And, the car is, thankfully, molded in white!

The body has two large sprue points attached on the driver’s side, which makes the car in my pictures seem warped. The body is actually straight, but care will be needed to remove these two sprue points. Previous experience suggests the hood will likely have some minor fitment issues that will need to be addressed, but this is nothing beyond the average modeler.  Seam lines will also need to be addressed.

Under the roof you’ll see manufacturer markings that you may wish to address by careful sanding.

Scripts are nicely molded, and hopefully will survive primer and color coats. I would be tempted to try to open the cowl vents, but a simple wash would also highlight this area. One may wish to remove and replace the wipers, although I suspect I’ll leave these in place on my build. The under-hood area features molded in battery, bottles, and other features that will need to be picked out with careful hand painting. This is pretty typical of Monogram’s design philosophy of the time and will actually look just fine once finished. This release also features separate(!) fender flares, rear spoiler, and optional front spoiler. The rear spoiler does have some sink marks in it that can be easily addressed with a tiny bit of putty and some sanding. Personally, my only issue with this kit is fitting the lower “nose” piece to the body without messing up my paint job.

Both sets of seats have decent molding, and the street seats feature full seat backs. The racing seats are nicely molded, although one may wish to add belts. The dash has good molding overall and captures the round vents, and simplified look of these early cars nicely. The single speaker mid-passenger side is featured as well. Steering wheel, shifter, and e-brake are separate parts. A simplified (era-correct?) roll bar is included for the racer.

The engine appears to be a 12a (not 13b of the Cosmo or later RX-7’s or RX-8’s). In this release, you have the option of the stock Niki air filter cover, or aftermarket Weber carburetors. The engine is molded in halves, with the transmission attached. But, keep in mind, this was originally released in 1979. The radiator, radiator shroud and fan are separate pieces. This little engine will detail up nicely with some plumbing and wiring.

Suspension is simplified, as would be expected of the era. The only thing here that some may not like is that the kit uses the same tires for both the street car and the racer. The racing wheels are offset massively to give the appearance of filling up the flared fenders. But, on the shelf, this will be just fine. I wonder if these fender flares will fit the old Tamiya RX-7?

The tires actually are Michelin TRX’s, and if you look reeeallly closely, you’ll see the sidewalls do have some detail. I was actually surprised, given that so many re-releases these days (and new releases!) do not future any sidewall detail. Two, period-correct, sets of wheels are included

Aside from the previously mentioned issue of the kit decals probably being rather translucent, the sheet does feature nice graphics, and what appears to be an excellent replication of the plaid cloth seats of the street car.

All-in-all, this looks like a fun build of a now rarely seen car. I’ll probably pick up a second kit just to build one of each version. Or, maybe the engine might find its way into another project. I’m glad to see this one back on the shelves. 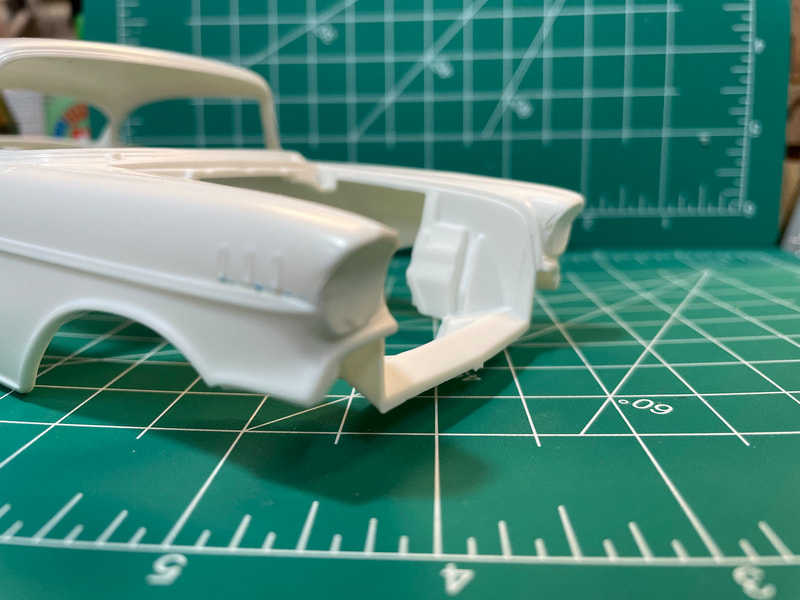 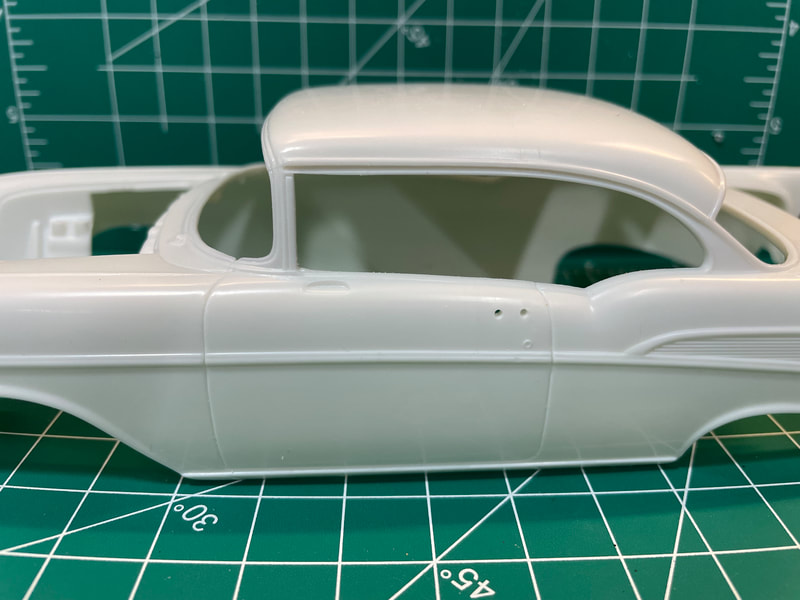 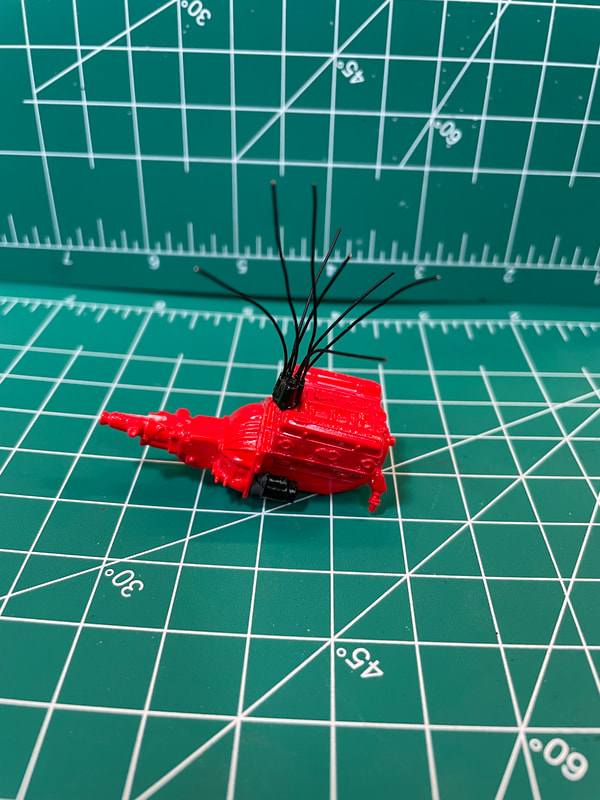 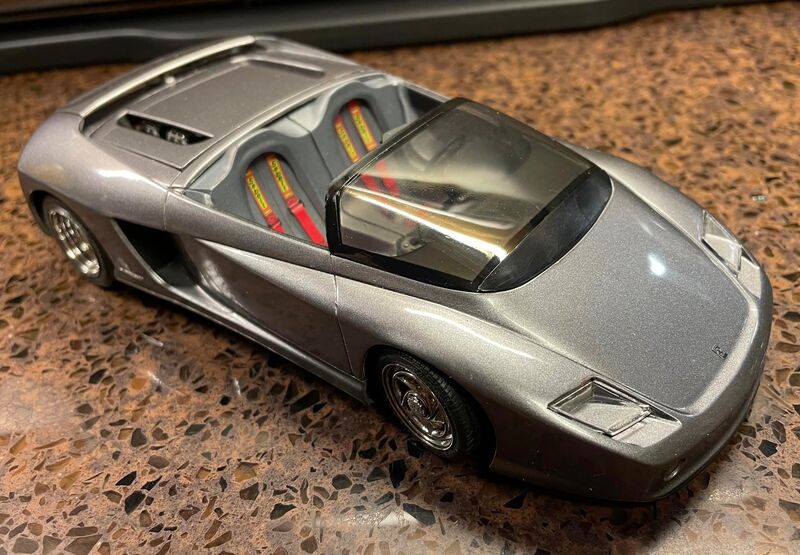 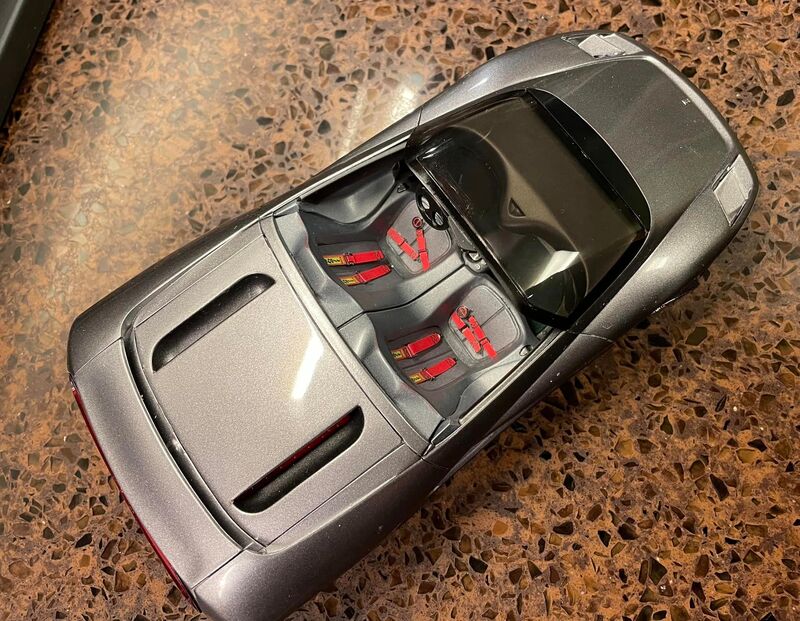 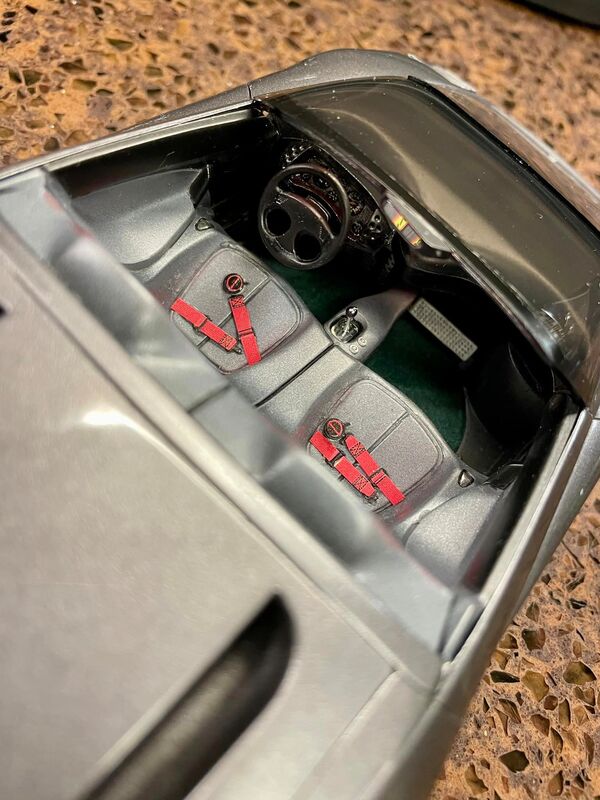 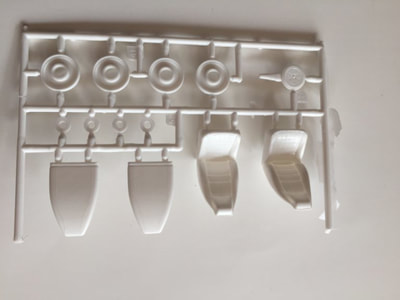 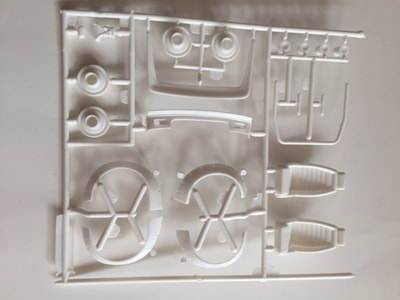 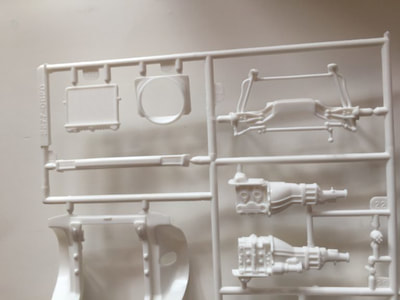 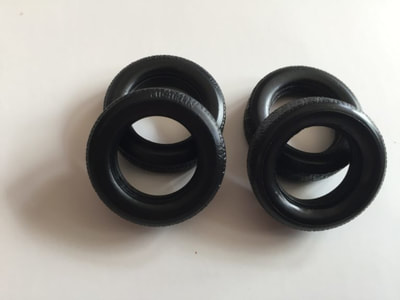 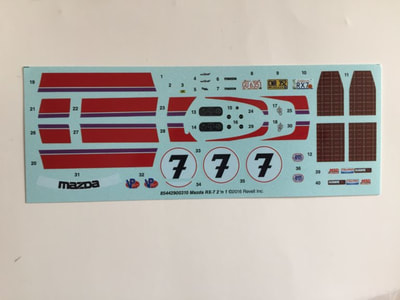 Enter eBay.   In mid-2018, I discovered this transkit while looking for nothing in particular.  I decided to take a chance and make the purchase.  To his credit, the seller shipped quickly.  He states that this is his original casting, and I have no reason to doubt him.   Here are a few pictures of the items that I received.  The seller also included the custom hood that you see, but I'll be saving that for a different time.  I'm not sure why he casts the bed as a single unit, and I'll probably use the Revell kits parts for that, as well.  Now, I just need to get started on replicating Dad's faithful ride.